A step-by-step tutorial to authoring your first interactive scenario

To author interactive scenarios, you must already be familiar with:

Of course, you'll also need expertise in the subject matter of your scenario.

Scenarios are interactive, preconfigured, sandboxed development environments accompanied by instructional lessons. A well-crafted scenario will provide a focused and concise lesson, teaching the learner how to use a specific tool or approach to accomplish a specific task.

As an example, please see this collection of scenarios, “Learn Kubernetes using Interactive Browser-Based Scenarios.” The first scenario in this series, “Launch A Single Node Cluster” illustrates the basic elements of a scenario: 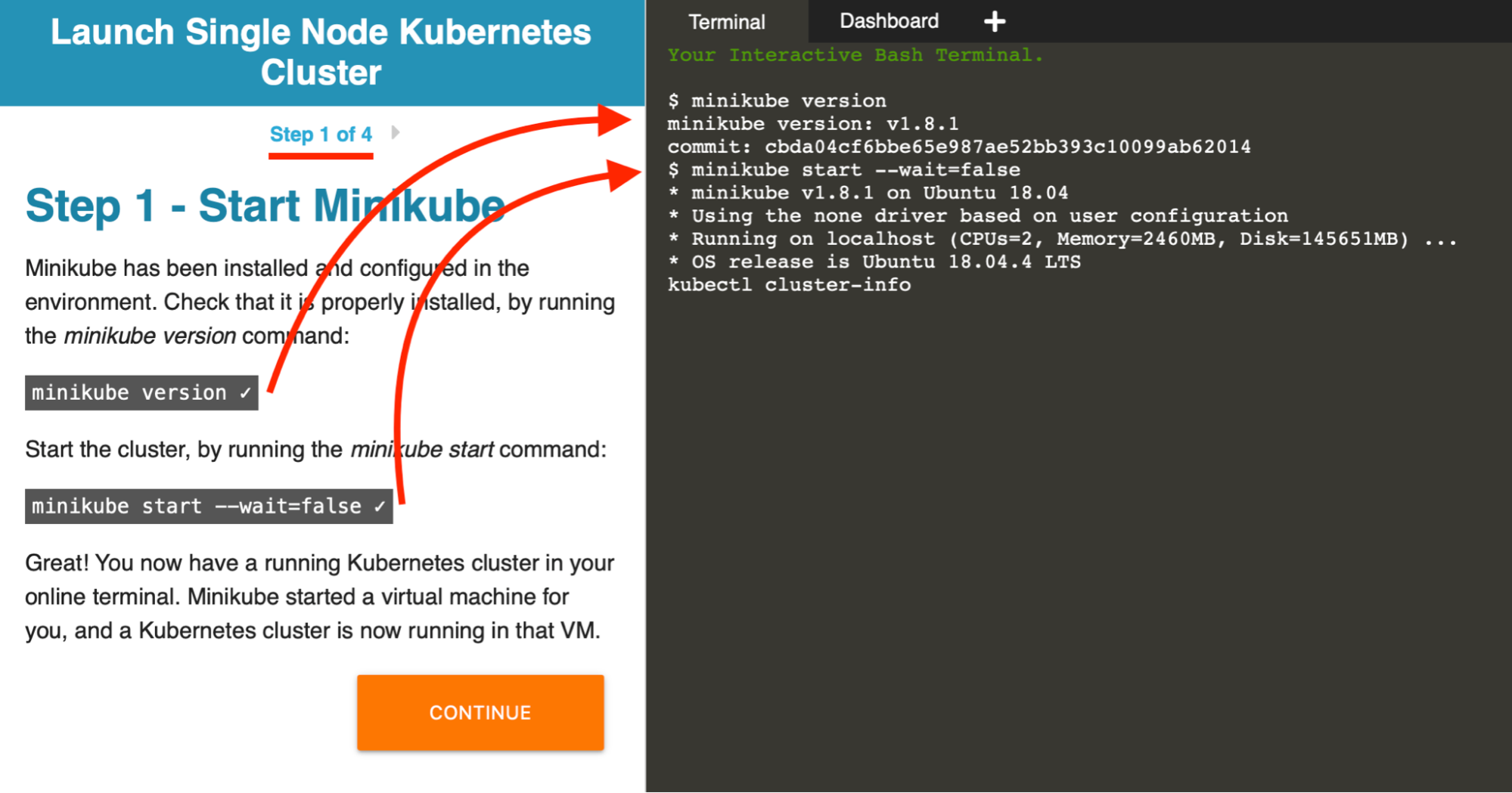 # How Do Scenarios Work?

At a high level:

Note that a learner's progress and data are ephemeral and cannot be recovered, even when the same learner restarts the same scenario.

Generally speaking, anything that can be installed in a Linux environment via command line can be run inside an interactive scenario. However, there are some constraints:

# ❗ O'Reilly authors: Clone your O'Reilly-provided repo to your local machine.

O'Reilly will set up accounts for you on both katacoda.com and also on our private GitLab instance (resources.oreilly.com). Please make sure that you can login to each of these services.

Your O'Reilly contact will provide you with two URLs unique to you:

Clone your repo onto your local machine.

Go to katacoda.com and create a new account. Login, and click "claim your profile" in the top right. During the "configure git" step, Katacoda will ask to connect to your GitHub account, where it will create a new repo called katacoda-scenarios.

Finally, clone your new repo onto your local machine.

# All authors: Copy the template.

Check your repo's contents. If it doesn't already include a copy of the new-scenario-template, then please download a copy from this repo: https://github.com/oreillymedia/katacoda-examples

Place the copy of the new-scenario-template in your new Katacoda repo. Then

Wait 30-60 seconds, then refresh your katacoda.com profile page to make sure the new scenario appears. Your profile URL will be something like: https://katacoda.com/username

You do not need to install the Katacoda CLI to author scenarios; that step can be skipped.

# Note the directory structure, with one subfolder for each scenario.

Generally speaking, each scenario you create will live in its own subdirectory within the repo.

NOTE: All directories and filenames should be lowercase.

# Duplicate and rename the new-scenario-template directory.

This template is a good starting point for your first scenario, as it already includes all the basic elements. Look inside this folder and note:

Duplicate the template and rename the new directory. Important note: All directory names must be lowercase and cannot begin with a capital letter. For example, regex-intro will work, but RegEx-Intro will not.

# Choose a base image.

The base image is your starting point. Review the list of supported images and choose the base image that is most like what you need. Note the corresponding imageid, and set that value in the index.json.

For example, the template scenario uses:

This shows a terminal panel at right, with lesson text on the left.

There are several alternate UI layouts. Explore the examples and decide what's most appropriate for your project. Reference the layout doc page, then, in index.json, set the corresponding uilayout value.

You're not required to have an IDE panel (terminal-only is OK!), but if you do want a code/text editor, note that we currently support two different IDEs:

To use VS Code, review the docs and note that additional config may be needed.

# Commit changes, push to remote, then test the scenario.

The basic workflow of authoring a Katacoda scenario is:

All of your scenarios can be found on your katacoda.com profile page, which is something like: https://katacoda.com/orm-firstname-lastname/

You cannot preview changes or run Katacoda locally, as it is a cloud-based service.

Once you've verified that the initial scenario is loading, continue on to...

Commonly, your scenario will need other software packages preinstalled or configured before the user starts pursuing the lesson. This is when you apply customizations to the base image that you selected earlier. Customizations are made by executing shell scripts at runtime.

In the new-scenario-template, a bash shell script called foreground.sh is executed at runtime. Note the line in index.json that specifies to run this script.

The "code" property specifies a script to run in the foreground. You can also execute a script in the background (meaning output is not shown to the user in the terminal) using the "courseData" property. For example:

You can specify scripts to run at the start of any step (not just intro), but it's most common to do so with intro, as that executes immediately when the scenario loads.

Finally, if your scenario relies on any example data or supporting files (e.g., example code or images), follow these steps:

Note that the target directory can be anything you want. In this example, ~/ maps to /root, since root is the default user, and /root is that user's home directory.

The example below copies over three specific assets. Instead of using the * wildcard to select all assets, two files are copied into the home directory, while a third is copied into /usr/local/bin and its permissions are set to executable.

Keep your assets lightweight; each asset is limited to 9 MB per file. There is no limit to the number of assets, but using more assets will increase the loading time of the scenario.

See this example for more detail:

At this point, you should have your first working scenario.

If not, please let us know how we could improve this tutorial by emailing us at [email protected].